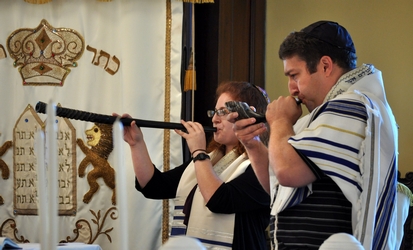 "Student rabbi brings her gifts for the holidays"

Rae served as a High Holy Day service leader (shlichat tzibur) for three years with Congregation Adath Yeshurun in Aiken, SC. The local paper published a write-up of her sermon, music, and service-leading for the small, but spirited, Jewish community of the town. (Note: The article's text was corrected to reflect her education, though the title was not.)

During her time as High Holy Day service leader in Aiken, SC, the community discovered her micrography and the paper did a feature on her art.

(Note: The article's text was corrected to reflect her education, though the title was not.)

RaeAn Designs has recently partnered with OyToys.com to distribute prints of Rae's art. OyToys has commissioned two pieces from RaeAn Designs: the Alef-Bet Baby Blocks and the Hatikvah (Israeli flag), and the latter is featured in the 2014 Yom Ha'Atzamaut (Israeli independence day) tribute in the Atlanta Jewish Times.

Links to news and other media that have featured Rae and her work. If you would like to speak to Rae for an upcoming feature or would like non-watermarked images for news media, email her with as many details about the feature as you currently have.

Some elements on this page did not load. Refresh your site & try again.